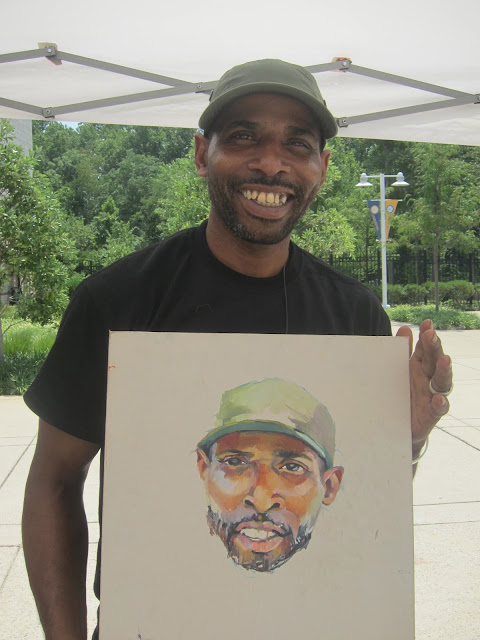 Mr. Keith is character embodied. He manages the grounds and so much more at THEARC in Anacostia. He pauses mid-conversation to pick up some blowing trash. He tells the kids from the boys and girls club that they should pick up too, because this is their backyard. While teaching one young lady about watering the garden there, he interrupts himself: "You're one of our girls, aren't you? See, she's all grown up now!" he beams. "Yes, Mr. Keith" she answers.
He is the father of ten children (including Geneva). Seven are biologically related and three joined his family when his wife's sister passed on. He attributes his solid marriage to the way that he and his wife let each other be the people that they are. They also make it a point to go out and have fun together despite being parents to a large family.
Mr. Keith believes that all religions are looking at one God. He forgives and believes that he is forgiven because God is Love. He lifts my painting bag into my car and sends me on my way with a hug.
Thank you, Mr. Keith for your words and for the witness of your example!

(This portrait sketch is one of a series of quick little oil paintings that I have been making in preparation for the eighth large portrait in my project AS IS. You can learn more about the project by clicking here.)

Email ThisBlogThis!Share to TwitterShare to FacebookShare to Pinterest
Labels: AS IS: An Urban portrait Project, DC street art, HFA Habitat for Artists