Hot Town Summer in the City 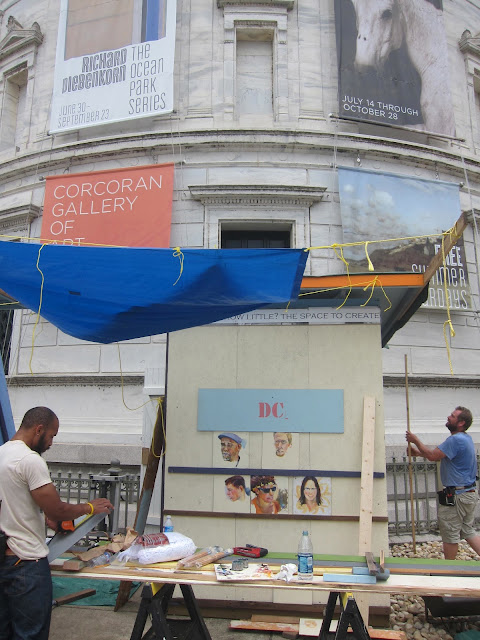 The Habitat for Artists crew started building two temporary studios in front of the Corcoran on Wednesday. Their mission is to connect the "mysterious" artist with the public by literally taking the creative studio space to the streets. My portrait project, AS IS, is based on the under-rated importance of face-to-face interaction, and so I am honored to be one of the artists who will be working out of these studios over the next few weeks!

The last three sweltering days have been spent painting quick, loose, oil sketches of passersby in preparation for one of the large, finished portraits that I will begin late next week. Each small painting is posted on the outside of one of the studios. When HFA disassembles the spaces at the end of August, people will be free to take their portraits home. I like the idea of gifting tangible records of conversations.

I have already met such interesting people while painting these rapid, little paintings including a diamond-diver turner limo-driver, and a South Korean student who can't get enough of typhoons! It's amazing to think that had I not been set up to be painting their portraits, I probably would have just passed by these people without a second thought. Next week, I will be posting "Meet So-and-So" posts with pictures and snippets of information about people and their portraits.

Happy Weekend to You, Friends!

Email ThisBlogThis!Share to TwitterShare to FacebookShare to Pinterest
Labels: art in DC, AS IS: An Urban portrait Project, HFA Habitat for Artists, public art, the Corcoran Gallery of Art, the corcran survives