You know those days when everything you do feels like a sweet indulgence? I meant to post wishes for a great weekend earlier, but I've been so busy drinking in the perfectness of every little happening that I hope you will forgive me. Here's what I've been up to:
Happy Belated Weekend, Friends!
Posted by nicole at 3:02 PM No comments: 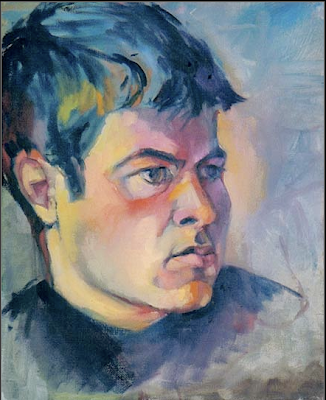 I've been married eight years today to this guy! (I promise he's really the most relaxed person there is, but I think I was sketching him while he was watching a really intense movie!) Anyway, I just wouldn't be able to do what I do with out him. He is the calm to my storm and I love the heck out of him!
Posted by nicole at 1:50 PM No comments:

Email ThisBlogThis!Share to TwitterShare to FacebookShare to Pinterest
Labels: reason for waking up in the morning

{Every week I post an image of an interior that reminds me of a work of art either in its palette, composition or mood.}
*I wasn't originally going to use this painting because it is much more decorative than art that I've posted here before. Then I started thinking about how the Lilly interior is really playful too and how it was actually put together in order to sell her products, so the match felt appropriate afterall. Hurray!
Posted by nicole at 11:54 AM No comments:

I hope that wind is in your sails and this weekend takes you somewhere lovely!
Posted by nicole at 6:33 AM No comments:

Email ThisBlogThis!Share to TwitterShare to FacebookShare to Pinterest
Labels: anyone know the name of the photographer behind this gorgeous picture?

Friends, I have not been sleeping well and I'm blaming my recent obsession with the theory of escape velocity. Specifically, I've been waking up at ungodly hours thinking about how it could relate to lifespan. Yeah, yeah, technically the idea only applies to ballistic trajectories (or thrown objects for all us non-physicsy types.)
What has me up though is the possibility that the death rate slows at the extremes of age. The concept is related to inertia in that things and people in motion tend to stay in motion.

I'm not really sure why I can't get my hooks out of that idea. Maybe it's the understanding that art making is a habit, put into motion by force of will and willful ignorance of its perils, with the objective of breaking free of the usual orbit. In any case, I woke up thinking that if there is any truth to it, I better get moving!
Posted by nicole at 4:30 AM No comments:

Email ThisBlogThis!Share to TwitterShare to FacebookShare to Pinterest
Labels: art making and inertia, death rate slows at the extremes of age, escape velocity

I've been working on a commission outdoors these past couple of weeks. It's been so hot that I feel like I could melt right onto the pavement kinda like this guy:

* Granted this match is not between an interior and a work of art, but doesn't this photograph bear a striking resemblance to this Van Gogh painting?
Posted by nicole at 7:39 AM No comments:

Friends, have you heard about the big (e)merge art fair and "unofficial stepsister fair," But Is It Art, coming to Washington, DC this fall? The first is an event modeled after Art Basel Miami Beach and its satellite events organized by Mera and Don Rubell, the prominent Miami-based art collectors, Helen Allen, the founder of New York and Miami’s Pulse contemporary art fair and D.C. dealer, Leigh Conner. The second is a response to the "practice of art tourism that (...) has little connection to the city’s artists." You can read more about it here.
I believe But Is It Art? is attempting to give local artists a platform while addressing issues surrounding the commodification and commercialization of art. If so, it's a worthy fight. I'm just not sure that it's being waged against the real enemy.
Leigh Conner runs a cutting-edge gallery in the district and I've been to a few meaty discussions and events hosted there. She has been quoted describing the alternate fair as "fantastic." In fact, she welcomes it, saying "If like the Armory, if like Art Basel, if what (e)merge is doing is inspiring others, we’re happy that a satellite is happening.”
The bottom line is that Washington, DC is our nation's capitol, yet our art scene is widely considered lacking. I for one am excited to see my city hosting an event that aims to draw international recognition to the area as a place that considers art important. If that event encourages further happenings, then all the better!
Posted by nicole at 8:11 PM No comments:

{Every week I post an image of an interior that reminds me of a certain painting either in its palette, composition or mood.}
*Sorry for the delayed post, Friends. My technical drama is thankfully behind me now!
Posted by nicole at 6:37 PM No comments:

I hope your weekend is chock-full of BBQs and beautiful lights! Happy weekend, Friends!
Posted by nicole at 4:52 AM No comments:

When I am working on a problem (artistic or otherwise), I always turn to my sketchbooks. I have one stashed in every corner of my home, studio, purse and car. So much of our communication is digital these days, but there is an honesty in the way that your hand marks what your mind is thinking when you put ink to paper.

Anyway, now some brilliant soul has created a traveling exhibition of sketchbooks aptly named The Sketchbook Project. Artists pick a theme from such choices as "Along the line," "Sandwich" or "Stitches and folds" and fill a sketchbook with related drawings and thoughts until the book is full. The resulting books will be exhibited on the 2012 tour and cataloged permanently in the Brooklyn Art Library afterwords. I might just have to make a trip to New York to see the finished project!
After all...

Posted by nicole at 8:06 AM No comments:

Email ThisBlogThis!Share to TwitterShare to FacebookShare to Pinterest
Labels: The Sketchbook project

I love what spaces say about the people who live in them. The following sites are two of my favorite sources for environmental portraits.

The Selby (of course!) is an inspiring look at the places where creative people live and work.
Posted by nicole at 1:52 PM No comments:

Email ThisBlogThis!Share to TwitterShare to FacebookShare to Pinterest
Labels: an afternoon with, images above by Michael Mundy, images below by Todd Selby, where we are

{Every week I post an image of an interior that reminds me of a painting either in its color, composition or mood.}

*Sorry for the delay this week, Friends! I spent the Fourth of July relaxing with the ones I love. I think this painting by Mary Cassatt perfectly sums up the luxury of a lazy day.
Posted by nicole at 8:55 AM No comments:

I did not take the above picture, but I could have. I was driving home from the studio today with my thoughts totally seeped in the project that I had just been working on, when a deer calmly ambled across Chevy Chase Circle, causing four lanes of traffic to screech to a simultaneous halt. It's a hot summer day in the city and everyone is zooming around town getting ready for the holiday weekend. Then this wild animal just comes out of nowhere and forces us to literally stop in our tracks and notice the world around us. It was funny little wake-up call, and I'm taking it as a sign not to miss a minute of life this weekend! Happy Fourth of July, Friends!
Posted by nicole at 1:31 PM No comments: