Monday Match: Into the Deep Edition

{Every week I post an image of an interior that reminds me of a work of art either in its palette, composition or mood. I hope that you enjoy!} 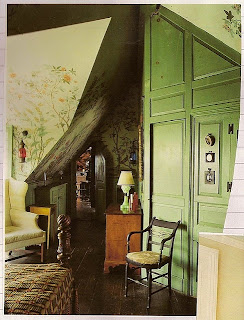 *I am so upset that I did not get a chance to see Jakuchu's silk paintings at the National Gallery of Art last week! Did you? A friend tells me that they have changed the way that she makes art!
The interior above reminds me of this painting in its composition and color. Each has an empty space at its center for things to float through (dust sparkles/fish) that imparts a kind of peaceful dynamism, don't you think?

Maybe Some Navel Gazing Is Necessary

Chances are that you or someone you know owns a Thomas Kinkade since according to critic Jerry Saltz, his reproductions hang in one out of every twenty American homes. If so, then you know that he recently passed away, and you have probably read articles like this one on the merits of his legacy.
The fire behind this article reminds me of the criticism that the last Norman Rockwell exhibit at the Museum of American Art received, and in fact Saltz draws a comparison between the two in his article. People were up in arms about the legitimacy of the illustrator being celebrated as an artist. Saltz states that "the reason the art world doesn't respond to Kinkade is because none — not one — of his ideas about subject-matter, surface, color, composition, touch, scale, form, or skill is remotely original." Similarly, critics decried Rockwell's work as trite, sentimentalised, expected.
The difference between Kinkade and Rockwell though lies in their personal recognitions and definitions of their own practice. While Kinkade churned out sticky-sweet images of bliss and called it art, Rockwell strained a human experience down to its emotive core and called it illustration. Navel gazing gets a bad rap it the art world, but when it helps an artist distinguish craft from the muse it's more than permissible: it's necessary. 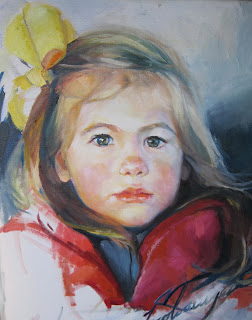 Four years ago today my daughter, Georgia, was born. Considering the fact that I just got around to painting her portrait, you can image that I haven't exactly been keeping a detailed baby book of her life. If I were better at record keeping though, I would want to make something like this! Happy Birthday, Peach!
Posted by nicole at 5:54 PM 1 comment:

{Every week I post an image of an interior that reminds me of a work of art either in its palette, composition or mood. I hope that you enjoy!} 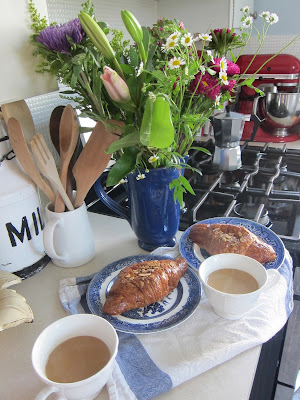 Last night my husband and I were talking about our trip to New Orleans a few years ago where we had almond croissants and espresso  every morning for breakfast. In the morning I woke up to this. I'd say the weekend is off to a good start!
PS--If you have read Jackie Battenfield's book The Artist’s Guide: How to Make a Living Doing What You Love and live in the DC area, you should come check out her show Field Notes at Addison/Ripley Fine Art in Georgetown tomorrow night. I admire her business savvy and am really looking forward to seeing her work!
Posted by nicole at 12:03 PM 2 comments:

Email ThisBlogThis!Share to TwitterShare to FacebookShare to Pinterest
Labels: Addison/Ripley Fine Art, Jackie Battenfield's book The Artist’s Guide: How to Make a Living Doing What You Love

Email ThisBlogThis!Share to TwitterShare to FacebookShare to Pinterest
Labels: from the studio

My best friend from forever turns a year older today! Happy Birthday, Mary!
Posted by nicole at 1:11 PM No comments:

I officially took a spring vacation to enjoy time with my family, but here are a few of my favorite stories from around the web last week:
What do you do when you need something to pass the time?
Isn't it amazing when life mirrors art?
Did you see this story about nine-year-old Cain's cardboard arcade?
Posted by nicole at 6:29 AM No comments:

{Every week I post an image of an interior that reminds me of a work of art either in its palette, composition or mood. I hope that you enjoy!}
*I hope that you had a beautiful Easter, Friends! Last night was so lovely and cool. We ate dinner outside under our globe lights, but it would have been a perfect evening for a walk along the waterfront!
Posted by nicole at 7:59 AM No comments: 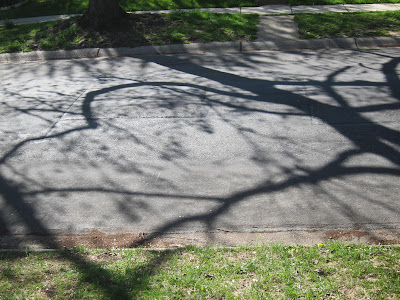 When I opened my curtains this morning, this is what I saw. Seemed appropriate on a day that is really all about love. Happy Easter weekend, Friends!
(I am taking next week off blogging to spend time with my family and friends. See you Monday, April 16.)
Posted by nicole at 5:57 AM No comments:

You Are What You Wear

Or at least that is what a new study out of Northwestern University seems to suggest. I recently came across some notes that I had taken during a Business of Art seminar at which the keynote speaker (a highly successful artist) stressed something similar. Namely, artists should dress like the professionals that they are. He argued that dressing like the six-figure earner that he was sent a message to both himself and his clients that he refused to play into the starving artist myth.
I think the issue for artists is a bit more nuanced. On the one hand, I definitely notice a difference in the way I act depending how I'm dressed for certain occasions. (Think killer new workout clothes vs. shabby sweats at the gym, or smart corporate attire vs. faded yoga pants to fight a traffic ticket.) On the other hand, being a successful artist is only half the polished business model that sells the work. The other half is the creative chaos necessary for making the actual art work.
So I've compromised. I wear my paint-splattered jeans when I'm creating, and more professional gear when I'm signing contracts or attending gallery openings. It felt a little arbitrary at first, but now it's automatic.
I'm interested: Do you wear certain clothes for particular tasks? Think it's all rubbish? I'd love to hear your thoughts.
Posted by nicole at 12:39 PM 4 comments:

Email ThisBlogThis!Share to TwitterShare to FacebookShare to Pinterest
Labels: dressing like an artist, you are what you wear

Imagine if you found a Picasso original in a thrift store!

(You can read the story here if you haven't already.)
I have a feeling that my junk shop addiction is about to deepen dramatically.
Posted by nicole at 5:49 AM 1 comment:

Congratulations to our dear friends, Ashley Hubbard and Robert Ludlow on their continuing success! Team Fleurir (and the installation that I made for their shop --eek!) was on Fox 5's morning show today giving tips on sprucing up your Easter treats.
Seriously Friends, if you have not been to their Georgetown shop yet, you need to go. Now. I'm so excited to tuck their handmade chocolate bunnies into my children's baskets on Sunday morning!
Posted by nicole at 9:03 AM 1 comment:

{Every week I post an image of an interior that reminds me of a work of art either in its composition, palette or mood. I hope that you enjoy!}
*Grant Wood was on my mind as I spent the weekend with dirt under my fingernails, helping my boys transfer their sprouting seedlings into our new vegetable garden. His painting above reminds me of this bedroom because of its kicked-up pastoral palette, bulbous, clumped volumes (furniture/trees, hills) and dramatically foreshortened planes that lead the eye back while compressing great distances.
Posted by nicole at 6:01 AM 1 comment: