It seems that I've been bookmarking artists for a while now who use different forms of sewing in their work. I love the way that these three examples use what is traditionally considered a feminine, utilitarian craft to make bold contemporary statements. 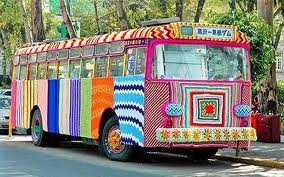 "Yarn Bombing" and other such practices could be described as considerate forms of urban graffiti. Groups like Knitta describe themselves as “a tag crew of knitters, bombing the inner city with vibrant, stitched works of art, wrapped around everything from beer bottles on easy nights to public monuments and utility poles on more ambitious outings.”  - quote via
2. The embroidered portraits of Daniel Kornrumpf 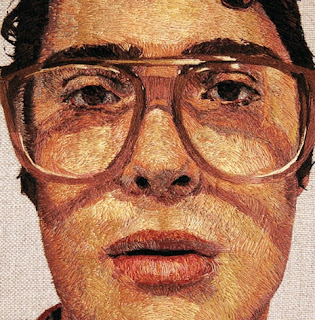 As a fellow portrait lover, I found the quote on the homepage of his website just perfect too!
3. All the work of Lauren Di Cioccio

I am especially enamored with her "Sewnnews" series which consists of New York Times papers encased in hand embroidered muslin.  She describes the series this way: "As news-gathering departs from paper form and is conveyed instead through the television and internet, the newspaper becomes a nostaligic and old-fashioned object. I describe the beauty of the ritual experience of newspaper-reading by describing the paper as a tactile and fragile object in the language of craft." All of her work is beautiful in its reaction to our culture of disposable objects.

Sewn objects recall the hand of the artist in the artistic process. While there are so many incredible conceptual artists to admire, there is something truly awe-inspiring about the reminder of the physical aspect of art making which accompanies that mental effort.
Posted by nicole at 11:22 AM